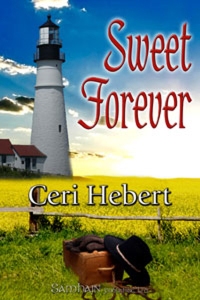 BIG WEEK!! SWEET FORVER IS AVAILABLE IN PRINT AT SAMHAIN PUBLISHING AND ALL SORTS OF PLACES LIKE AMAZON.COM, BORDERS AND BARNES AND NOBLE TOMORROW, FEBRUARY 26TH!!!

So, in honor of it’s big premiere, I’m holding a contest for a FREE SIGNED COPY of Sweet Forever.

Each day this week I’ll post an excerpt from one of my books and then I’ll ask a question. Email the answer to cerihebert@comcast.net and all correct answers will be entered into the drawing Friday evening.

So, in honor of Sweet Forever, my first excerpt will come from this book.

Hayden lowered her head and pushed on, steeling her nerves against the threat of the storm. She kept her eyes on the toes of her shoes, finding it better not to look at the sky. The heat that saturated the air around her competed with the anger and frustration that burned like dry kindling inside her head.

“Nothing like this would happen in Clarksport,” she muttered under her breath, thinking of her tranquil hometown on the Maine coast. Reluctantly she picked up the pace and headed toward the Winslow’s place. Maybe the lazy horse had stopped for a snack along the way and would let her catch up.

Low clouds perched along the edge of the horizon. The air shifted, like the whole world had gathered itself up, took one deep breath, and waited to exhale. The sky bore down on the earth with pressure that Hayden could feel all over her skin. Though she’d been in South Dakota for about a month, she knew what those clouds would bring. As if confirming her fears, a light danced across the bottom of the thunderheads.

Thunder rumbled in the distance, and the sky fluctuated from varying shades of gray to a greenish color that reminded her of the skin tone of someone who didn’t take to a boat ride out on the bay. And here she was, walking as fast as she could toward the oncoming storm. But that was the direction the old horse had taken, and that was the direction of Forever Ranch, her nearest shelter.

The beat of what could either be a horse or a fast cow pulled her attention away from the angry sky. Hayden jerked her head up, expecting to see Bugs heading back toward her, maybe scared by the oncoming storm.

Instead, it was a man on a brown and white horse, taking the bend in the path ahead like hell was fast on their heels.

Hayden pitched herself off the narrow trail to avoid a certain collision. Her feet betrayed her, and she stumbled into a thick clump of grass. Her balance disappeared and the only thing to save her from landing on her rear was a prickly bush. Before she hit it, Ben Winslow pulled the big horse up within two feet of her. Deadly looking hooves kicked up dozens of tiny stones, several slapping her denim-clad legs.

Since arriving in South Dakota, Hayden had seen Ben on more than a few occasions, either in town or when he paid visits to her grandmother at Sweet Prairie. No woman in the world could ignore his powder blue eyes that danced as if he didn’t have a care in the world. His smile came in a close second, honest and wide, setting off dimples that were a strange mix of boy-next-door and drop dead sexy. The combination of the two features could send a thrill straight to the coldest heart. Her heart wasn’t cold, so he was far too dangerous to her well-being. Hayden had never seen anyone look so much like a man right out of an old western. Ben Winslow could fulfill any girl’s fantasy of a gorgeous cowboy. The Marlboro Man had nothing on him.

Now, however, his face looked as dark and dangerous as the storm that gathered force behind him. A clap of thunder rolled for several seconds and Hayden wondered if he’d come to her rescue or to scare the living daylights out of her. He said nothing for several seconds and looked as though he might just pull her over his knee to punish like a petulant child. He glared down at her, from beneath the brim of the same ivory hat he always wore and she noticed that his usual smile was gone without a trace. Hayden untangled herself from the bush, which was only an excuse not to look into the angry pair of eyes.

“You damned idiot. I don’t know as I’ve ever met a bigger fool than you, Hayden Merrick.”
Without even a “by your leave”, he grabbed her by her upper arm and hauled her upwards as if she weighed no more than a toddler, setting her down with a thump on the saddle in front of him. The motion only served to agitate the already sore joints she’d injured earlier, courtesy of Bugs.

“Hey! What—put me down!” Hayden shoved her elbow into Ben’s ribcage, but found that it was too well muscled and her jab, no matter how well aimed on her part, didn’t budge him. As much as she tried to remain calm, the contact with Ben wreaked havoc on her senses that rivaled anything the adrenaline from the storm created.

“You just sit still. We’ve got to get back to the barn before that storm hits us,” he said against her ear. “Unless you’d rather walk?”

“No,” she muttered and took hold of the saddle horn and tried to ignore the ill-timed attraction.
It didn’t do her heart or nerves any good when he tightened his grip around her waist. He pulled her up against his broad chest, swung his horse around, and clicked his tongue against his teeth, setting the horse back into motion.

Hayden couldn’t find the courage to do anything but clutch at the horn and pray to any god who had the time to listen, that she didn’t fall off. She threw in an added plea that the storm wouldn’t meet them before they reached the safety of Forever Ranch.

Remember, email answers to cerihebert@comcast.net. All correct answers will be entered into the drawing.