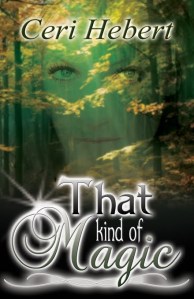 That Kind Of Magic is now available at The Wild Rose Press!!

If Patrick hadn’t stopped the kiss, Charlotte had no idea where it could’ve led. Her head spun wildly. She couldn’t even explain what possessed her to kiss him as she had. Curiosity couldn’t be to blame, though she’d wondered often since the last dream if his kisses were as good in real life as they were in her imagination.

She had her answer. Reality was definitely better because she knew she wouldn’t have to wake up and think of this as something fleeting and with the substance of morning mist. Patrick was solid and standing right in front of her, his gaze smoky and sensual. Reluctantly, she let her hands drop away from him, but she continued to feel the warmth of his body on her skin. One thing she didn’t do, though, was look away from him.

“Wow,” she murmured. “What was that?” She knew what it was. Fire. Just one kiss had been enough to set her body ablaze.

“I’m not sure,” Patrick replied. He looked as puzzled as she felt.

“I think we’ll be late for our reservations,” Charlotte said softly. She wanted to take his hand but knew if she so much as put one finger on him they’d never make it to the restaurant. She’d drag him back to her apartment and make love to him for the rest of the night.

I’m so excited about this one! Well, I’m excited about all my releases. Best Man over at Sapphire Blue Publishing is still doing very well and getting lots of praise.

Sounds like another rainy day. Where was all this rain back in August? Not that I’m complaining. All the leaves are off the trees anyway. But this doesn’t do much for the cold that I’ve been battling for a week. We’re down to just a horrible cough. I feel bad for everyone who has to listen to me, though.

NaNo is going all right. I lost it for the past week because of this cold and other things, but I’m slowly catching up. I may finish this puppy yet. Of course I have to do a lot of writing each day to do it.

And now I’m off to some of that writing.

One thought on “HAPPY RELEASE DAY!!”