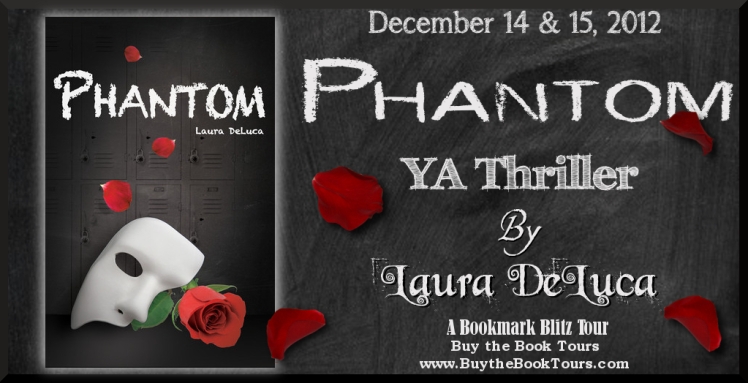 Good Morning everyone! I’m very happy to have Laura DeLuca back! Today she’s bringing us her Young Adult thriller Phantom. I hope you enjoy the blurb and excerpt! 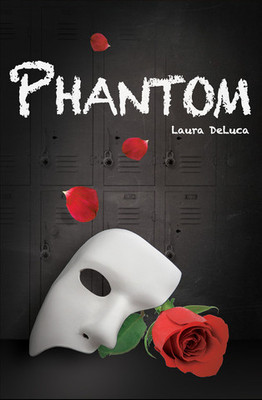 The “Phantom” was a musical phenomenon that Rebecca had always found enchanting. She had no idea that her life was about to mirror the play that was her obsession. When her high school drama club chooses “Phantom” as their annual production, Rebecca finds herself in the middle of an unlikely love triangle and the target of a sadistic stalker who uses the lines from the play as their calling card.

Rebecca lands the lead role of Christine, the opera diva, and like her character, she is torn between her two co-stars—Tom the surfer and basketball star who plays the lovable hero, and Justyn, the strangely appealing Goth who is more than realistic in the role of the tortured artist.

Almost immediately after casting, strange things start to happen both on and off the stage. Curtains fall. Mirrors are shattered. People are hurt in true phantom style. They all seem like accidents until Rebecca receives notes and phone calls that hint at something more sinister. Is Justyn bringing to life the twisted character of the phantom? Or in real life are the roles of the hero and the villain reversed? Rebecca doesn’t know who to trust, but she knows she’s running out of time as she gets closer and closer to opening night. Only when the mask is stripped away, will the twenty first century phantom finally be revealed.

“What is it about you that makes me feel like you’ve stolen not only my heart, but my soul,” she whispered as she leaned her head on his shoulder.

He smiled sadly, and continued to caress her hair as he sang to her in his clear, beautiful tenor.

Your soul is filled with a beauty so rare.
With the power to bring both love and despair.
Which will you bring me, my angel of song?
A quick painful end of a love that’s life long?

Beautiful words. Romantic lines from the play they both loved. Normally, those words coupled with his enchanting musical voice, would automatically make Rebecca swoon. But suddenly something occurred to her. It had never seemed quite as ominous as it did at that moment. Instantly her hands fell away from Justyn. She jolted back on the bench as far as was possible without falling off the edge.

Those words. They weren’t exactly the same as the ones she had heard before in the muffled distorted voice of her twisted stalker. It wasn’t the same verses as the ones written on the threatening notes. But both Justyn and the stalker used the same motis operendi. Could that really be a coincidence? The voice had a different tone. But could it have been Justyn’s voice? She couldn’t be sure. As the familiar sense of fear and mistrust slithered up her spine, she felt herself pulling further and further away from him, even as Justyn reached out to her.

“What you just said, what you’re always saying . . . it’s just like the message, like the calls and letters.”

“What are you talking about?”

“The person who has been threatening me. They always use lines from the play, just like . . . just like you.”

Justyn looked confused at first and then horrified as the realization of what she was saying truly sunk in. She knew he was a good actor. His reaction didn’t really mean anything.

“Becca, it’s just a coincidence.” He swore at her. “I was just trying to be romantic. I thought you liked it when I quoted the play . . . I’m sorry if I scared you.”

He tried to reach out to touch her hand, but Rebecca jumped up off the bench, nearly tripping over her forgotten book bag in her sudden, panic stricken desire to escape.

She was really starting to freak out. She couldn’t control it. Hysteria was taking over. She was breathing hard, half crouched and ready to pounce. She was like a frightened, cornered animal.

“You really think I did all those things, don’t you?” The misery in his voice was undeniable, but Rebecca was too overcome with her own fear to dwell on it. “Why Becca? Because I dress in black? Because I wear a pentacle around my neck? I thought you were different. I thought you could see past the stereotypes. I thought you knew who I was on the inside. You say you love the story of Erik, but do you really understand it? Phantom is supposed to teach you that it isn’t the way someone looks that makes him a monster, but the way he’s treated that can turn him into one.” 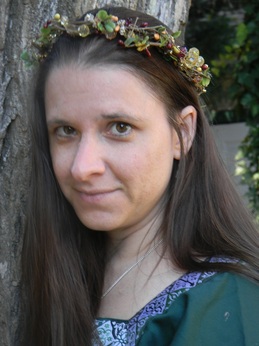 Laura “Luna” DeLuca lives at the beautiful Jersey shore with her husband and four children. She loves writing in the young adult genre because it keeps her young at heart. In addition to writing fiction, Laura is also the sole author of a popular review blog called New Age Mama. She is an active member of her local pagan community, and has been studying Wicca for close to eight years. Her current works include Destiny, Destiny Unveiled, Phantom, Morrigan and Player.

WHERE TO FIND PHANTOM